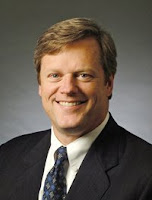 Harvard Pilgrim Health Care CEO Charlie Baker has just announced he will be running for Governor in 2010 and the Republican Caucus enthusiastically welcomes him to the race. Voters will have a clear choice when they head to the polls next year as they evaluate the current administration’s record.

For the last 2 ½ years, Governor Deval Patrick and the Democratic-controlled Legislature have raised taxes dramatically making it harder to live and work in the Bay State, violated the public’s trust on numerous occasions not to mention they have practically depleted the rainy day fund. It is time for a change in the Corner Office and in the Legislature. Charlie Baker and other Republican candidates could potentially help restore a two party system in Massachusetts. Taxpayers are sick of the tax and spend mentality that continues to dig the state deeper into a hole as well as the continuous abuse of power.

Massachusetts Republicans want to lower your taxes, raise the ethical standards and make working and raising a family in the Bay State easier. A Republican in the Corner Office can help those goals become a reality.
Posted by Massachusetts House Republicans at 12:45 PM