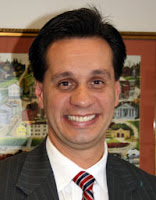 Representative Vinny deMacedo is set to testify today at a public hearing for his Mandatory Minimum Sentencing Bill. This critical bill is set to be heard at 1pm. The public hearing, for bills currently held by the Joint Judiciary Committee, will be heard in Gardner Auditorium at the State House.

House Bill 625, "An Act Relative to Mandatory Sentences for those committing an assault on a law enforcement officer," seeks to stop individuals from even thinking about firing at a police officer. Representative deMacedo says this bill's goal is to show a commitment from this Legislature that gun-fire directed at police will not be tolerated. The Plymouth Republican says there is simply zero tolerance for anyone convicted of this kind of behavior towards a police officer. With the passage of this bill, anyone who is convicted of firing at an officer will face at least 10 years in jail.

Testimony is expected to be heard from police officers and the Plymouth County District Attorney's Office.
Posted by Massachusetts House Republicans at 11:00 AM