Jones Sits in For Governor Romney at Jindal Event 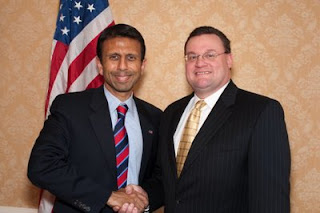 House Minority Leader Brad Jones recently had the opportunity to sit in for former Governor Mitt Romney at a Taj event in honor of Louisiana Governor Bobby Jindal. Jones hosted a roundtable discussion with Governor Jindal and a number of politicos, on a variety of issues including education, healthcare and the economy.

Governor Romney had planned on hosting the event but was unable to attend due to his wife’s birthday. Romney asked Jones to take his place and the Minority Leader says it was an honor to host the panel. Republicans from all over the state attended the event.

The photo above was provided by Amy Kelly Photography.
Posted by Massachusetts House Republicans at 9:44 AM