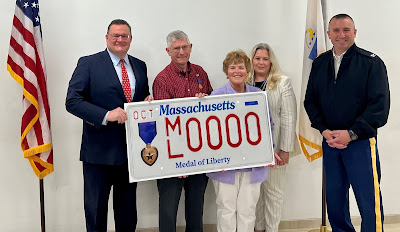 Last week, the Registry of Motor Vehicles unveiled a new Medal of Liberty license plate to honor the Commonwealth’s fallen heroes. This special plate is now available free of charge to recipients of the Massachusetts Medal of Liberty, which was established in 2009 and is presented to the next of kin of Massachusetts service members who were killed in action, died in service while in a designated combat area in the line of duty, died as a result of wounds received in action, or died as a result of a training accident in the line of duty.

The Medal of Liberty is awarded in conformance with the standards and protocol of the Purple Heart. Recipients are selected by a three-member commission consisting of the state’s Adjutant General and two field grade officers.

The idea for the Medal of Liberty Plate came from Reading resident Arthur Vars, a constituent of House Minority Leader Brad Jones. Mr. Vars received the Medal of Liberty in 2019 in honor of his uncle, US Army Sgt. Christopher Young Vars, a World War II and Korean War veteran who died as a Prisoner of War in North Korea in 1950. Working in collaboration with Mr. Vars, Representative Jones filed the language needed to create the new plate in two consecutive legislative sessions, and it was eventually adopted as an amendment to the FY22 state budget.

Residents can learn more about the Massachusetts Medal of Liberty and see if their family may qualify by using this link. Applications for the new Medal of Liberty Plate are available on the RMV website.

The House Republican Caucus joins with Americans everywhere to honor our nation’s fallen soldiers on Memorial Day. As we pause to remember all who have served and have made the ultimate sacrifice, let us never forget the true cost of freedom.

Posted by Massachusetts House Republicans at 7:00 AM