The Ceremonial Passing of the Rubber Stamp 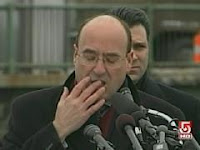 The new Massachusetts Department of Transportation board was sworn in today, officially marking the end of Jim Aloisi’s tenure as Transportation Secretary. We’d like to believe his departure signals a new beginning for the state’s transportation system, but unfortunately Governor Patrick has decided to fill more than half of the new 5-member board with recycled transportation agency officials. Is that reform we can believe in?

But as Jim Aloisi moves on, we want to take a moment to reflect on an editorial in today’s Boston Herald. As you may know, Aloisi submitted a close out report to Governor Patrick and the Herald has quoted the letter. For example, Aloisi wrote in the report, “Despite formidable obstacles, a strong platform for meaningful change has been build during my time in office – one that will serve your administration and the people of Massachusetts well. I have established both a new way of doing business…and a new way of thinking about our state’s transportation needs.”

So, let us get this straight? Ousting Dan Grabauskas from his post at the MBTA at a cost of more than $320,000 to the taxpayers will serve the people well? What about the massive traffic delays brought on purposely on Easter Sunday? Is that the strong platform for meaningful change he was talking about?