The Truth is in the Numbers 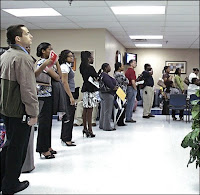 Last week, state officials reported “Massachusetts lost 900 more jobs in October, but the state's unemployment rate dropped to 8.9 percent from 9.3 percent.” However, according to a CNBC report today the “real” jobless rate more accurately depicts the number of people unemployed or under-employed. In fact, CNBC is reporting that the real national unemployment rate is 17.5%. So, how is it possible that last month the Commonwealth lost 900 jobs, yet the unemployment rate went down? Something just isn’t adding up!

The fact of the matter is people who have lost a job, have had their hours cut down from full time to part time or people who have been unemployed for so long that they’ve fallen off the list to receive unemployment are struggling. And it is the responsibility of the Governor and the Legislature to put Massachusetts’ economy back on the right track. However, that goal won’t be accomplished by raising taxes and fees and it seems that’s all the Democrats know how to do!
Posted by Massachusetts House Republicans at 4:06 PM