Boston Herald gets it Right on Redistricting 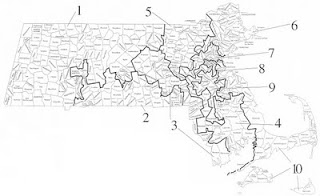 Earlier this year, Republican lawmakers made a strong push to hand over the redistricting process to an independent commission. That proposal was overwhelmingly rejected by the majority of Democrats in the House who are apparently not interested in making redistricting a more transparent and fair process. Today, the Boston Herald endorsed the idea and highlighted a similar argument Republicans made for needing a new process.

The House Republicans’ proposal, which failed on a 132-23 vote back in March, would have created a seven-member redistricting commission consisting of a dean or professor of law, political science or government from a Massachusetts institution of higher learning appointed by the Governor; a retired justice appointed by the Attorney General; and an expert in civil rights law appointed by the Secretary of State.

At least two dozen Democratic legislators have supported the proposal in the past but voted against the independent redistricting commission in March.

The proposal has been endorsed by the League of Women Voters, Common Cause, Governor Patrick, former Governor Romney as well as dozens of newspapers throughout the Commonwealth.

This is good policy that needs to be implemented. Too bad Democrats aren’t on board with the concept of transparency.
Posted by Massachusetts House Republicans at 11:48 AM