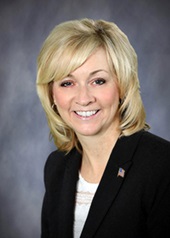 The committee will attempt to resolve the differences between House Bill 4954, An Act expanding protections for reproductive rights, which was engrossed by the House of Representatives on June 29, and Senate Bill 3003, An Act expanding protections for reproductive and gender-affirming care, which the Senate engrossed on July 13. Both bills offer protections to medical providers and to patients but differ on the question of late-term abortions performed after 24 weeks, with the House version allowing such procedures in the event of a “severe fetal anomaly” and the Senate bill allowing the procedure only in cases involving a “fatal fetal anomaly”.

“Kim has been a longtime advocate on many women’s rights issues, including allowing women to make important healthcare decisions in consultation with their doctors,” said Representative Jones. “Her thoughtful approach to negotiations will serve the conference committee well as she works with her colleagues to try to find common ground in formulating a compromise reproductive rights bill.”

Representative Ferguson currently serves as the First Assistant Minority Leader of the House of Representatives and is a member of the Joint Committee on Higher Education and the Special Joint Committee on Redistricting. First elected to the Legislature in 2010, she represents the First Worcester District, which consists of the communities of Holden; Paxton; Princeton; Rutland; Precinct 1 in Sterling; and Precinct 2 in Westminster.