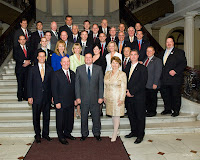 In case you missed it, led by bill sponsor Bradford Hill (R-Ipswich), the entire House Republican Caucus voted yesterday in support of legislation aimed at protecting the public from dangerous, repeat offenders.

House Bill 3811, An Act Relative to Habitual Repeat Offenders, Sentencing and Improving Law Enforcement Tools, often referred to as “Melissa’s Bill”, was filed in 2000 in memory of Melissa Gosule, a then 27-year-old teacher who was brutally murdered by a repeat offender who had served fewer than two years in jail for a combined 27 criminal convictions. More recent violent attacks by repeat offenders further illustrate the need for legislation aimed at keeping these offenders incarcerated.

“I am pleased that the Legislature has confirmed its commitment to ensuring the safety of all the citizens of the Commonwealth from dangerous, habitual offenders. Additionally, I am thrilled by the overwhelming support that I have received from my colleagues on both sides of the aisle,” stated Representative Hill. “We in the Republican Caucus were happy to have taken the lead, joined by our Democratic colleagues, in passing this legislation.”

Amendments offered by House Republicans during the debate include: mandatory written notification of parole hearings to the Attorney General, District Attorney, local Chief of Police, and the victim for an offender convicted of a violent crime who has served more than 5 years in prison; and a requirement that parole for life sentences may only be granted by a 2/3 vote of the parole board.

“I am pleased that this legislation, 10 years in the making, has passed the House overwhelmingly, and with bi-partisan support,” said House Minority Leader Bradley H. Jones, Jr. “‘Melissa’s Bill’ will further ensure the safety of all of the citizens of the Commonwealth from dangerous, habitual offenders.”

Components of “Melissa’s Bill” passed by the House of Representatives includes:

• The length of time a habitual offender must serve before becoming eligible for parole is increased from ½ to 2/3 of their sentence.

• Anyone convicted of a predetermined offense, who has been convicted twice previously of one or more the listed offenses, will be considered a habitual offender and be punished by imprisonment for the maximum term provided by law for the third offense.

• No person shall be considered a habitual offender based upon any offense for which such person was adjudicated a delinquent child.

• Anyone convicted of a felony who has been previously twice convicted and sentenced to prison for at least 3 years by the state of Massachusetts, another state, or the United States, will be considered a habitual offender and be punished by imprisonment for the maximum term provided by law for the subsequent felony for which that offender is to be sentenced.

The legislation will now be sent to Conference Committee.
Posted by Massachusetts House Republicans at 10:02 AM