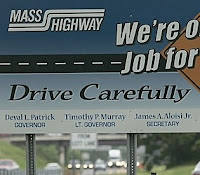 Governor Patrick has reversed a slew of policies put into place by the Romney Administration during his time in the corner office, and today our cash-strapped state got another slap in the face, literally! Big and costly highways signs can now be seen with a new feature, Governor Patrick’s name. Now, we know we are coming up to an election year, but given the current fiscal situation, is it really wise for the Governor to be spending precious taxpayer money on self promoting signage. Probably not.

And just to add insult to injury, the Patrick Administration is also wasting thousands of dollars in federal stimulus funds on signs to let motorists know which projects are funded by the federal stimulus money. Wasteful and inefficient to say the least. The Commonwealth deserves better.
Posted by Massachusetts House Republicans at 1:27 PM