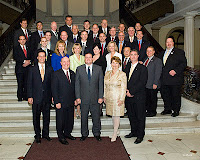 In response to legislation co-sponsored by the House and Senate Republican caucus, the House of Representatives voted overwhelmingly to freeze the anticipated unemployment insurance tax rate increase.

Filed by Representative Bradley H. Jones, Jr. (R-North Reading) and Senator Bruce E. Tarr (R-Gloucester), House Docket 4205, An Act Relative to Mitigating the Increasing Costs for Small Businesses by Freezing the Unemployment Insurance Rate, seeks to prevent a tax increase of $220 per employee, or 31%, on the Commonwealth’s businesses. Garnering bi-partisan support, the passage of this legislation marks the fourth straight year that a similar bill has been passed by the Legislature protecting Massachusetts employers from this damaging and unnecessary tax hike.

“Implementing this rate freeze is the best and most concrete way we can help to move the Massachusetts economy forward,” said Representative Jones. “I am pleased that the Democratic majority in the House chose to side with the Republicans in removing any impediments to economic growth in the Commonwealth.”

Continuing the Republican Caucus’ ongoing effort to bring long-term job creation and economic opportunities to the Bay State, Republican legislators reached across the aisle, working with their Democratic colleagues to ensure that the anticipated tax rate increase would not take effect.

“The House is taking a major step today in responding to our call for prompt action for a freeze in unemployment rates,” said Senator Tarr. “This is clearly an important step to prevent an unnecessary penalty for employers working to emerge from the recession, and Senate Republicans will work to ensure that our chamber also acts quickly to address this issue.”

The legislation now stands before the Senate for consideration.
Posted by Massachusetts House Republicans at 8:19 AM