Happy Trails To You… 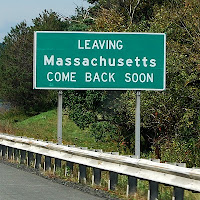 In case you missed it, and we are sure the Patrick Administration hopes you did, Massachusetts has yet again lost jobs to our neighbor to the north: New Hampshire.

As reported in the Eagle Tribune yesterday, Enterasys Networks, a computer company with offices in Andover, is moving from its current 150,000 square foot digs to a new facility in the Granite State.

With this move comes the loss of 540 jobs here in the Bay State. In addition to relocating its offices from Andover, Enterasys Networks plans to add about 80 jobs when they unpack in New Hampshire.

When commenting about Enterasys’ move North, Michael Bergon, a business development manager for the New Hampshire Division of Economic Development, said: “Many Massachusetts companies are looking to relocate here [New Hampshire] because of the lower tax burden and more favorable business climate.”

While we appreciate the Patrick’s Administrations ongoing effort to deliver only positive news to the residents of Massachusetts, the harsh reality is that we continue to lose jobs to other states as a result of our state's burdensome regulations and the high cost of doing business. As a result, the House and Senate Republican Caucus’ intend to “practice what we preach” and propose a targeted jobs plan aimed at not only returning residents of the Commonwealth to work, but reaffirming Massachusetts as a desirable place to live and work.
Posted by Massachusetts House Republicans at 12:04 PM