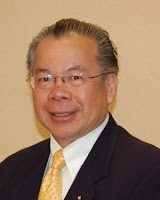 As you know, the 187th General Court was sworn in last week. What you may not have known is that two of them were making history as they took the oath of office. Representatives Donald Wong and Tackey Chan are the first two Asian-Americans ever to serve in the Massachusetts Legislature.

Representative Wong is one of the new members of the Republican Caucus. He's a Saugus Selectman and business owner, who says he's focused on the economy, jobs and taxes.

NewsCenter 5's Janet Wu put together a special piece on Wong and Chan's historical swearing-in. Click here to watch the story in its entirety.
Posted by Massachusetts House Republicans at 10:24 AM