Time to give up the “common man” act! 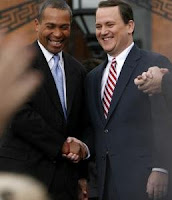 Governor Deval Patrick and his sidekick Tim Murray should probably give up the whole “common man” act. Patrick and Murray seem to be having a field day attacking their Republican rival but what they both seem to be forgetting is that Deval Patrick benefited from the success of a very large corporation.

After doing a little research, The Capitol View stumbled upon the employment agreement between Coca-Cola and Deval Patrick from 2001. Governor Patrick and attack dog Tim’s attacks on Charlie Baker have been hypocritical to say the least. According to the contract Deval Patrick actually made a comparable salary to his chief gubernatorial rival while serving as an executive to Coca-Cola. Governor Patrick and Lieutenant Governor Murray have had no problem going after Baker’s salary, saying his pay increase came on the backs of health insurance recipients. But, what about Deval Patrick? Isn’t this the same governor who wants to tax soda because of its contribution to childhood obesity? So, would it be fair to say, Deval Patrick got richer as our country’s children got fatter????

Now, that is something to think about.
Posted by Massachusetts House Republicans at 12:52 PM