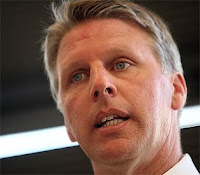 Treasurer Tim Cahill has been throwing around a lot of incendiary rhetoric lately and yet his actions don’t match his words. In case you missed it, the Boston Globe reported today that “Two weeks before leveling grave charges that the state’s universal health care law was bankrupting Massachusetts, state Treasurer Timothy P. Cahill signed a statement for potential buyers of a $538.1 million bond that made no mention of his concerns about a financial calamity.”

This is just another example of Tim Cahill’s political posturing. Regardless of how you feel about the Commonwealth’s universal health care law, the fact of the matter is Tim Cahill’s efforts to paint himself as a fiscal conservative is nothing less than nonsense. What’s even more frustrating than his ridiculous rhetoric is his clear disconnect with the truth and reality.

Over the last couple of weeks, we’ve heard Tim Cahill say he’s not involved in the budget process and has no ideas how to fix the budget crisis. Then, he appears on Glenn Beck and claims he’s been trying to get the state budget under control for years? Which is it, Tim? Are you disingenuous, dishonest or just plain incompetent?
Posted by Massachusetts House Republicans at 11:53 AM