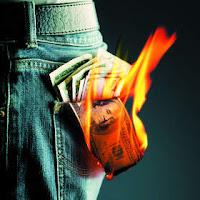 Over the weekend, the Boston Herald reported that the Commonwealth recently “received a one time last-minute $82 million litigation settlement, and revenues came in $37 million higher than expected for October and November.”
And not surprisingly, that money is burning a hole in the pocket of our tax and spend Governor! After weeks of publicly reprimanding the Legislature for not doing more to fix the state’s budget shortfall, Governor Patrick has decided to go on a bit of a shopping spree.

On Friday, Governor Patrick filed a $42 million supplemental budget, all of which will be spent on homeless shelters and services. While this is an admirable cause, it’s a bit hypocritical of the Governor to expect the Legislature to grant him expanded 9C authority when the first extra dollar the Commonwealth generates is spent so quickly!

In addition to the supplemental budget, Governor Patrick appears to be shying away from other proposed cuts. While the one time settlement and the boost in tax revenue is positive, it’s not an open invitation to spend! Governor Patrick needs to recognize that in no way is the Commonwealth in the clear financially speaking. It was only a couple weeks ago that Governor Patrick was saying the Legislature owes it to the taxpayers to clean up the budget mess, well Governor Patrick owes it to those same people to behave in a more fiscally responsible manner!

One lawmaker told the Herald, “Given that the sky was falling, it’s a bizarre turnaround!” We couldn’t agree more!
Posted by Massachusetts House Republicans at 1:31 PM