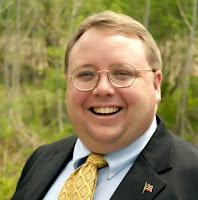 Representative Paul Frost, the ranking Republican on the Joint Committee on Election Laws, appeared on New England Cable News' Broadside with Jim Braude tonight. The Auburn Republican went head to head with Robert Haynes of the AFL-CIO regarding the senate seat vacated because of the passing of Senator Edward Kennedy.

As discussed multiple times here on The Capitol View, now that there is a Democrat in the corner office, the Democratic Majority is looking to allow for an interim appointment, despite the fact that they rejected a similar proposal in 2004 and then again in 2006.

Click here to watch the segment in its entirety.
Posted by Massachusetts House Republicans at 2:36 PM