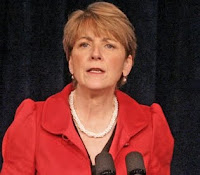 Attorney General Martha Coakley is busy campaigning to replace Senator Ted Kennedy, but it seems the AG has also been busy handing out big raises to her staffers. According to the Boston Herald, Coakley hired 13 new employees in the past year and added $700,000 to her office payroll.

Keep in mind, all of this was happening while state lawmakers were making drastic cuts to local aid and raising taxes significantly. Everyone in state government was told they were going to have to do more with less, trim excess spending and deal with massive budget cuts.

Attorney General Coakley should pay a little more attention to the state’s dire financial situation. It’s politicians like Coakley who prove just how disconnected and out of touch state government is with the taxpayers of Massachusetts.
Posted by Massachusetts House Republicans at 1:21 PM