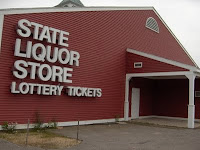 An article in the Wall Street Journal confirmed what many of us already knew; Massachusetts residents are opting to make liquor purchases in tax-free New Hampshire. As you are well aware, on August 1st, the state’s sales tax went up 25% and the sales tax exemption on alcohol purchases became a thing of the past. Republicans argued Massachusetts retailers would lose out on business as their counterparts north of the border would benefit from the dramatic hike in taxes, but the tax and spend Democrats didn’t agree.

According to the WSJ, “Nearly half of New Hampshire's booze is sold to out-of-state customers.” The WSJ also reported that the difference in price can be significant. The article said, “The Hampton store recently offered one-liter bottles of Ketel One Vodka for $20.99. A private liquor store in downtown Boston, meanwhile, was selling a three-quarter liter bottle of the same vodka for $27.39.” No wonder Massachusetts residents are making their liquor purchases in New Hampshire!