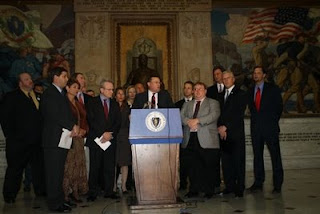 Republican lawmakers from both the House and Senate held a press conference this afternoon to express their frustration and disappointment with Governor Patrick’s increased tax burden on residents and businesses.

“I cannot in good faith ask, nor can I justify asking taxpayers to fork over even more of their hard earned dollars to support Governor Patrick’s misplaced priorities,” said Representative Brad Jones. “In the last year alone, the Democrats with much opposition from the Republicans, have passed the largest corporate tax increase in history, raised the cigarette tax and proposed a slew of other revenue increases. Enough is enough. We are tired of this argument being painted as if increasing the gas tax or hike the toll fees are our only solutions. That is a fallacy and one we are here to clarify.”

Representative Jones, Assistant Minority Leader George N. Peterson, Jr., Representative Vinny deMacedo were joined by their Republican colleagues at the podium. Along with elected officials, Peter Christie of the Massachusetts Restaurant Association and gas station owner Arthur Pappas were there explaining to the press exactly why their industries can no longer afford to stay afloat.

For example, Governor Patrick has proposes a sales tax on candy, soda and alcohol for which he hopes will generate $25 million for the current fiscal year and as much as $150 million for next fiscal year. Especially for those of us who represent communities within close proximity to other states, all we will see is decreased tax revenues and small businesses closing.
With so many companies and retail operations struggling, raising retail taxes to cover any shortfalls is the last thing we should be thinking about. The only ones making out are the businesses in surrounding states.

“It is time to roll up our sleeves and make the hard choices. Increasing taxes is easy, it is a quick fix, but no longer can our residents and small business owners afford quick fixes. They long for and deserve long term solutions and our caucus is offering sound alternatives and we hope our counterparts in the House will start considering them,” added Representative Jones.
Posted by Massachusetts House Republicans at 1:10 PM