According to an article in State House News, “the confidence index of the state’s largest business trade group ticked up slightly in January from its all time low, but continues to reflect the severe recession.”

Ticked up slightly isn’t exactly reassuring to the thousands of Massachusetts residents getting in the unemployment lines daily and for the small business being forced to lay off workers regularly.

We need to see real reform and we need to see it sooner rather than later. No longer can we be the state known as unfriendly to business. We need to encourage, through various incentives, businesses to come to the Commonwealth. And while the Governor is out in California trying to get businesses to flock east, he is simultaneously discouraging them from coming here through policies he put in place.

Below is a chart showing where the Bay State falls as far as business confidence, and you can see by the drastic downturn, that 2008 was not a good year and 2009 is expected to follow in its footsteps. 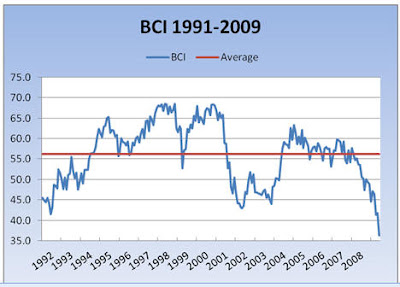