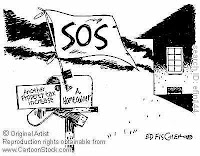 In case you missed it, the Boston Globe ran a piece over the weekend telling readers what they already know: Massachusetts values are down, but property tax bills are up! According to the article, “The average tax bill on a single-family home in fiscal 2010 increased about $140, a 3.3 percent increase, according to figures released this month by the state Department of Revenue. The average tax bill for a single-family home was $4,390. The statewide home values, which have more than doubled since 2000, peaked in 2007 but dropped about 4.6 percent last year to an average of $373,702.”

Where’s that property tax relief “Candidate Patrick” promised? Oh that’s right, nowhere to be found! Instead, Governor Patrick has raised taxes by more than $1.5 billion. If that’s the change Governor Patrick wants to guard, we’re scared of what other guard he wants to change!

Click here to read the article in its entirety.
Posted by Massachusetts House Republicans at 12:22 PM