GOP Leaders: No guarantee FMAP payments will come through 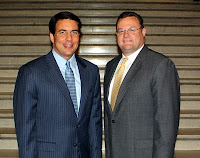 In January, Governor Patrick filed his FY11 budget proposal that relied on $689 million in federal assistance for Medicaid payments. At the time, Governor Patrick and Administration and Finance Secretary Jay Gonzalez said they were confident Congress would act quickly to approve the FMAP extension and that President Obama would soon have the legislation on his desk to sign. The U.S. Senate did approve the extension, unfortunately the House of Representatives rejected a proposal to provide additional Medicaid funding to states.

This news couldn’t come at a worse time as the state is already facing a $2.5 billion structural deficit.

“Governor Patrick never should have released a budget, without a contingency plan, that was so dependent on federal aid that had yet to be approved,” said Representative Jones. “At this point in the process and with the likelihood that we will not receive this money, it is incumbent upon the Governor to outline his plan for filling this hole immediately. One can only hope it’s not another tax increase.”

“The Patrick-Murray administration has consistently been two steps behind, always having to react to economic news,” said Senator Tisei. “It’s frustrating and disappointing that Governor Patrick refuses to act in a proactive manner. There was never a guarantee that this aid would be approved by the federal government and if this money does not come through, it will be the hardworking taxpayers who will suffer from devastating cuts to health and human services.”

The state’s stabilization fund has practically been depleted since Governor Patrick took office. Only $600 million remains in the rainy day fund, far short of the $700 million that would be needed to cover this additional budget gap.
Posted by Massachusetts House Republicans at 3:07 PM