Just when you thought it couldn’t get worse!

We have said it before many times here on The Capitol View, but just when you thought it couldn’t get any worse - it does! Several media outlets are reporting that the unemployment rate here in Massachusetts dramatically increased to 9.4% in December as the Bay State shed 8,400 jobs. This number comes as a bit of a surprise after the state’s unemployment rate dipped down to 8.7% in November. 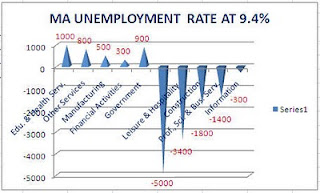 State House News Service broke the numbers down by industry:

> The trade, transportation and utilities sector cut 5,000 jobs in Massachusetts
> The leisure and hospitality industries lost 3,400 jobs
> Construction jobs were down by 1,800
> Professional, scientific and business services jobs were off by 1,400
> The information sector shrunk by 300 jobs

SHNS is also reporting Massachusetts has lost 2 percent of its jobs over the past year, or 66,200 jobs. Though many in the Patrick Administration including the Governor himself would like the general public to believe things are looking up, these numbers suggest otherwise. Until people are back to work times will remain tough for the average family trying to make ends meet. Governor Patrick and the Democrats on Beacon Hill need to make generating jobs number one on the agenda immediately. Unfortunately, they’ve been so focused on raising your taxes and spending well outside the state’s means that economic growth seems to have slipped their minds!
Posted by Massachusetts House Republicans at 3:42 PM