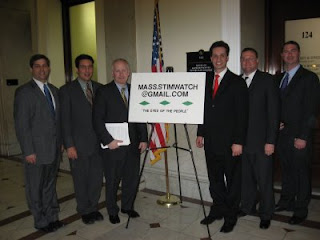 State Representative Vinny deMacedo and State Senator Michael R. Knapik today announced the creation of a central e-mail address through which citizens could report questionable spending in Massachusetts from the federal economic stimulus package. The address, mass.stimwatch@gmail.com, welcomes tips from Massachusetts citizens who become aware of wasteful or questionable initiatives in their communities.

Knapik and deMacedo are the ranking minority members from their respective caucuses on the Ways & Means Committee and have been appointed to serve on the Legislature’s Temporary Joint Committee on Stimulus Oversight.

Taking their queue from former US Senator William Proxmire (D-Wisconsin) and his famed “Golden Fleece Award,” Knapik and deMacedo hope this initiative will shine daylight and bring transparency to the Commonwealth’s stimulus spending.

“Human nature being what it is and history showing a propensity for losing track of spending when such large amounts of taxpayer money are made available- see BIG DIG- I am afraid this stimulus plan will resemble a late-night commercial for ‘Bureaucrats Gone Wild,’” Knapik offered. “We’ve already read of potentially $21 million for solar-powered trash cans, and I worry that as funding trickles down to 351 cities and towns across the Commonwealth that similar expenditures on frivolities that do nothing to put our citizens back to work will send this stimulus down the river,” he continued.

Calling the taxpayer and local citizenry the government’s best watchdog on fiscal matters, Knapik and deMacedo urged concerned citizens to engage themselves in local government and gain an understanding for how their hard-earned tax money is being spent. While state stimulus spending information will be available at www.mass.gov/recovery, the site will be maintained and decisions made by members of Governor Patrick’s Administration.

“We really can’t afford to sit by and allow tax payers money to be spent without proper oversight from the 6.4 million citizens of the Commonwealth, “ deMacedo said. “We hope this initiative will serve as a check on the unprecedented power the Government will hold in allocating stimulus funding,” he continued.

Massachusetts is estimated to receive between $6 billion and $9 billion in federal aid over the next two years from the stimulus package. As much as $2 billion of this will be in the form of infrastructure investment.

“I was encouraged by comments made by the Vice President on Wednesday night where he threatened stimulus spending managers with embarrassment on television and radio should they squander these resources,” deMacedo added. “I hope President Obama’s pronouncement that ‘nobody messes with Joe’ is heeded and is sufficient warning to the people charged with allocating and accounting for stimulus spending,” Knapik concluded.
Posted by Massachusetts House Republicans at 4:17 PM