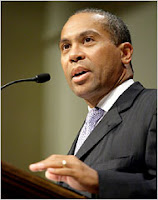 Today, the GOP caucus called on Governor Patrick to announce publicly that if a sales tax increase passes in the House, he will veto the bill, and that is exactly what the Governor has just done. Governor Patrick has just distributed a statement and below are a few excerpts from the letter.

"This afternoon, as the House considers its budget proposal for FY10, members will be asked to consider an increase in the sales tax. Without final and satisfactory action on the several reform proposals before you, I cannot support a sales tax increase and will veto it if it comes to my desk."

"Before we consider any broad-based tax increase, we must first regain the public's confidence in government's ability to steward public funds wisely. That's what our reform agenda is about. On that front, we have unfinished work."

Sound familiar? The Republican Caucus may be small in numbers, but today when it spoke, the Governor listened. We'll let you know if the Democratic-controlled House does the same.
Posted by Massachusetts House Republicans at 12:39 PM