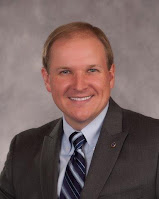 Representative Todd M. Smola (R-Warren, Ranking Member, Committee on Ways & Means) has been selected as one of three House legislators appointed to the conference committee that will negotiate differences between the House and Senate versions of the state budget. Both the House and Senate recently passed budgets totaling roughly $49.8 billion for fiscal year 2023. The conference committee will reconcile differences between the two proposals. Rep. Smola will be joined on the committee by Reps. Aaron Michlewitz (D-Boston) and Ann-Margaret Ferrante (D-Gloucester) from the House of Representatives. On the Senate side, Sens. Michael Rodrigues (D-Westport), Cindy Friedman (D-Arlington) and Patrick O’Connor (R-Weymouth) have been appointed to the committee.

"I am honored to have been selected to the budget conference committee once again,” said Representative Smola. "The budget is the number one priority for the legislature and every aspect of it is closely examined and deliberated. I look forward to working with my fellow conference committee members to produce a responsible budget for the commonwealth."

“As the Ranking Republican on the House Ways and Means Committee, Todd has long been committed to prioritizing the needs of our cities and towns while also advocating for fiscally responsible state spending on behalf of the Commonwealth’s taxpayers,” said House Minority Leader Bradley H. Jones, Jr. (R-North Reading). “His many years of experience in helping to craft the annual state budget will be an asset to the conference committee as it works to reconcile the differences between the House and Senate spending plans and develop a consensus budget for Fiscal Year 2023.”

Fiscal year 2023 begins on July 1st, which gives the conference committee less than a month to negotiate a compromise between the two versions of the budget. A final document will go to the House and Senate for a vote before moving to Governor Baker’s office for final approval. For additional information please contact Representative Smola at Todd.Smola@mahouse.gov or (617) 722-2100.

Posted by Massachusetts House Republicans at 11:09 AM