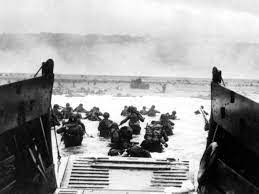 Today marks the 78th anniversary of D-Day, the start of the Allied invasion of Western Europe, when more than 156,000 American, British and Canadian troops stormed the beaches of Normandy in France. The invasion was launched in the early morning hours of June 6, 1944, and marked a major turning point for America and its allies during World War II, but came at the cost of thousands of American lives.

Today’s anniversary, coming just one week after Memorial Day, serves as another reminder of the commitment and sacrifices made by America’s military personnel. The Massachusetts House Republican Caucus salutes our D-Day veterans, and the many men and women who continue to keep our country strong by serving in the United States Armed Forces.

Posted by Massachusetts House Republicans at 7:00 AM