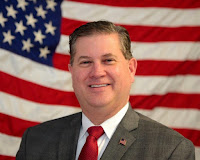 
Established in 2008 as part of the Oceans Act, the Commission works closely with the Secretary of Energy and Environmental Affairs to develop and maintain the state’s ocean management plan. Its 18 members include legislators, municipal officials and representatives of state agencies, along with environmental and fishing industry stakeholders.


“The Ocean Advisory Commission plays a critical role in helping to preserve and protect one of our most important natural resources,” said Representative Jones.  “I am confident that Representative Muratore will do an exemplary job in carrying out his duties and responsibilities as a member of the Commission.”


The initial ocean management plan was filed in December of 2009.  A revised version was released in January of this year, in keeping with the enabling legislation’s directive that the plan be updated at least once every five years.


Representative Muratore represents the First Plymouth District, which consists of Precincts 2 through 8, 10, 12, 14 and 15 in the town of Plymouth.  A former Plymouth Selectman, he was elected to the Legislature in November of 2014.
Posted by Massachusetts House Republicans at 10:51 AM