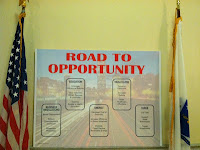 The formal proposal, which comes on the heels of the Republican Caucus’ statewide 2011 GOP Jobs Tour, offers policies that are key to facilitating economic growth in Massachusetts and supporting individuals and businesses statewide.

“With the recent news that the Commonwealth in fact created 30,000 fewer jobs in 2011, now is the time to act on a solution that will put our residents back to work,” said House Minority Leader Brad Jones. “I encourage my colleagues to join the Republican Caucus in taking a proactive approach towards job creation and retention in Massachusetts.”

“We’ve got no time to waste to create a better climate for job creation in Massachusetts, and the corrected job growth figures released last week prove it,” said Senate Minority Leader Bruce Tarr. “The Republican jobs package offers a prime opportunity for all of us to work together to take targeted, decisive actions to confront real barriers to creating jobs, and to get people who need them back to work.”

Highlights of the G.O.P. Jobs Package legislation include:

• Energy: Decrease the cost of electricity for businesses and ratepayers, increase the efficiency of Green Initiatives and promote cost-effective renewable energy;

The legislation has been filed as five omnibus bills in the House of Representatives, and as sixteen individual bills in the Senate.
Posted by Massachusetts House Republicans at 4:12 PM