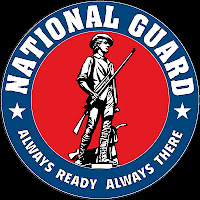 Today marks the 375th anniversary of the National Guard. We’d like to take a moment here at The Capitol View to say thank you to all of our National Guard members. Your service to our country and the great sacrifices you make is a great source of pride for all.

With origins tracing back to Salem, Massachusetts, the National Guard is the oldest component of the Armed Forces of the United States. According to their website, “the National Guard still consists of Citizen-Soldiers and Airmen providing protection from natural disaster, training regularly to uphold high standards of readiness, and also deploying to far-away countries to protect the United States’ national interests abroad. Although the country’s growth and expansion has made it a large military force around the world, the National Guard still remains a community cornerstone – just as it did when it was given birth on December 13, 1636.”
Posted by Massachusetts House Republicans at 10:34 AM