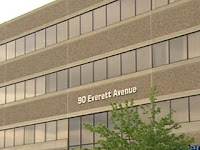 WBZ-TV’s I-Team ran a great piece in last night’s newscast, uncovering even more waste and inefficiency by the Patrick-Murray Administration. The story, which was reported by Joe Shortsleeve, found that the Department of Revenue had spent millions of taxpayer dollars on a building in Chelsea that has barely been used since the lease was signed two years ago.

House Minority Leader Brad Jones appeared in the piece and not surprisingly was not shocked to hear that the Patrick-Murray Administration was wasting more taxpayer money. This is afterall the same administration that wanted to fill a job that had been vacant for more than a decade with a political ally to the tune of $175,000.

Click here to watch the piece in its entirety.
Posted by Massachusetts House Republicans at 10:18 AM