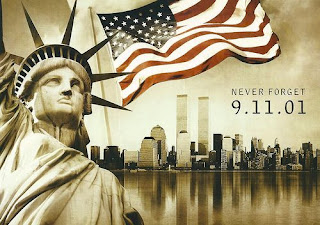 “One of the worst days in America’s history saw some of the bravest acts in Americans’ history. We’ll always honor the heroes of 9/11. And here at this hallowed place, we pledge that we will never forget their sacrifice.” – President George W. Bush, speaking at the dedication of the 9/11 Pentagon Memorial on September 11, 2008.

On September 11, 2001, America came under attack when terrorists used two commercial airplanes as weapons to crash into the twin towers of New York’s World Trade Center. A third plane was used to attack the Pentagon, while a fourth plane, apparently intended for an attack on our nation’s capital, was brought down in a Shanksville, Pennsylvania field after passengers fought back against the hijackers. When it was over, nearly 3,000 Americans were dead, including hundreds of first responders who perished at the World Trade Center while trying to save others.

We will never forget the many acts of bravery and heroism that took place on September 11. On this somber anniversary, the members of the House Republican Caucus join with Americans everywhere to honor the memories of the many innocent victims whose lives were tragically cut short on that terrible day 21 years ago.

Posted by Massachusetts House Republicans at 10:13 AM