Veterans Day: Honoring All Who Served 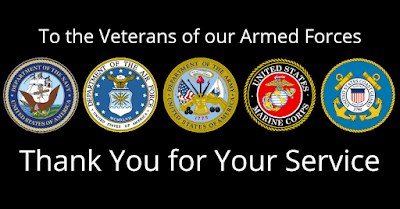 “The nation owes a great debt to its veterans, whose service to the nation spans every decade, every year, every day of our country’s existence. Through untold courage and sacrifice, America’s veterans have secured the liberty which the Founding Fathers sought to establish here in the new world. Whenever and wherever the nation has called – in times of darkness and danger as well as in times of peace and prosperity – America’s veterans have been there. Veterans have proudly carried the torch of liberty for all to see.”

The members of the House Republican Caucus join with Americans everywhere to salute our nation’s veterans. The debt we owe our veterans can never be fully repaid. Thank you to all who have served, and to the families that have shared in their sacrifices so that all Americans can remain free

Posted by Massachusetts House Republicans at 6:00 AM