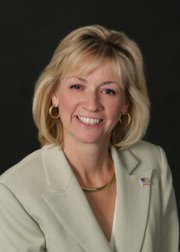 State Representative Kimberly Ferguson (R-Holden) has been appointed to the conference committee to resolve differences between Senate Bill 2365 and House Bill 4145, An Act relative to educational opportunity for students.

The Student Opportunity Act was released by the Education Committee on Sept. 19. This legislation looks to implement the recommendations of the Foundation Budget Review Commission, and would add $1.5 billion in new funding to the public school system over a seven-year time frame.

“I am honored to be appointed to the conference committee on this historic piece of legislation and thank the House Minority Leader for this opportunity. To me, this bill represents a road map and a true commitment to our future. Not a week went by that this critical legislation didn’t work its way into conversations with my constituents, various representatives from our schools, and various stakeholders. I continue to be proud that here in the commonwealth we have a strong, bipartisan commitment to education, and the bottom line is that we won’t stop pushing for high academic standards, achievement, and success for all of our children, and the funding to support just that” said Ferguson.

“As a member of the Foundation Budget Review Commission whose 2015 report provided the impetus to revisit the state’s education funding formula, Representative Ferguson understands the key issues that need to be addressed to help eliminate disparities between school districts,” said House Minority Leader Bradley H. Jones Jr., R-North Reading. “I have no doubt that she will take an active role on the conference committee by advocating for meaningful reforms and accountability measures to ensure that all Massachusetts students have access to a quality education.”

Senators Jason Lewis, Michael Rodrigues, and Patrick O’Connor are the Senate conferees. The six-member conference committee could begin meeting as early as this week.
Posted by Massachusetts House Republicans at 3:25 PM