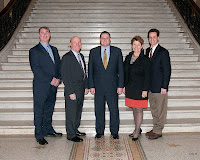 House Minority Leader Bradley H. Jones, Jr. (R-North Reading) is pleased to announce that the House Republican Caucus has elected their leadership team for the 188th Session of the Great and General Court.


“The team assembled by House Republicans has years of invaluable public service to offer,” said Representative Jones.  “This upcoming session will be extremely difficult as the Commonwealth faces numerous challenges, especially when it comes to the state’s finances. I look forward to joining the members of the leadership team in offering creative and fiscally responsible solutions to ensure that Massachusetts is a better place to live, work, and raise a family.”

While the leadership team anticipates a busy legislative agenda, they join their Republican colleagues in remaining focused on economic recovery, fiscal responsibility, and creating an open and accountable state government.


“The Republican Caucus is ready to get to work on behalf of the residents of the Commonwealth,” said Assistant Minority Leader George Peterson. “The next two years will be full of tough decisions as the Legislature is poised to tackle some of Massachusetts’ most pressing issues. I am confident that House Republicans will approach each and every day and issue with confidence, integrity and fiscal prudence. ”


Recognizing the need for a coherent and responsible solution to the Commonwealth’s fiscal shortcomings, House Republican’s enter the upcoming session with constructive ideas and innovative approaches towards repairing Massachusetts’ financial situation.


“House Republicans are committed to bringing forth common-sense solutions to dealing with the state’s fiscal challenges,” said Vinny deMacedo, Ranking Republican on House Ways and Means. “Beacon Hill has to start living within its means, just as the taxpayers of the Commonwealth are forced to do in their own personal lives. It remains the desire of the Republican Caucus that Democratic legislators once again renew their pledge from the two previous sessions - refrain from any statewide tax or fee increases.”
Posted by Massachusetts House Republicans at 2:29 PM